Yoga and aikido share the goal of a tension-free body that uses energy wisely and efficiently.

In sixth-century China, because Zen Buddhist monks who meditated for long hours were developing spiritually but weakening physically, Prince Bodhidharma introduced monks at the Shaolin Temple to what later became known as kung fu—a martial art based on Indian yoga. The monks were not only priests but warriors too, and practiced this first martial art on a daily basis.

In the seventeenth century, Okinawa (an island between China and Japan) was captured by the Japanese, who took away the islanders' weapons. To defend themselves, the Okinawans turned to the martial arts of China. As the century progressed, the martial arts slowly transformed from a means of combat to a spiritual path. Both yoga and martial arts are modes of self-healing that aim to dissolve stress and increase awareness. Both practices strive to awaken energy, or chi, within the body. Like yogis, martial arts practitioners learn how not to think, how to go beyond thinking to samadhi, a state of meditative union with the Absolute. Aikido, one of the newer forms of martial arts, embodies principles remarkably similar to the yoga tenets of moving from the body's center, relaxing under pressure, and extending chi.

The Zen-like principles of aikido de-emphasize the power of the intellect, instill intuitive action, and help individuals overcome the effects of evaluating, judging, analyzing, thinking—overriding conditions of our society. Yoga too encourages surrender, letting the mind go, and being in the present, and downplays striving and pushing.

"Competition is an integral part of life in our culture, starting from birth," says George Leonard, who holds a fifth-degree black belt in aikido, co-owns an aikido studio in Mill Valley, California, and is author of several books including The Way of Aikido: Life Lessons from an American Sensei (Dutton, 1999). But progress in aikido comes with patient and diligent training. He tells his students "to stay with the process, enjoy this level, do not strive; keep practicing and don't try to get anywhere."

A dojo—the Japanese word for a place of enlightenment—is a temple of sorts, and the place where martial artists practice. In the dojo, you make contact with your fears, reactions, and habits. This arena of confined conflict, with an opponent or partner engaging you, helps you to understand yourself more fully. Though in yoga the process is more individual, your yoga mat can be a dojo. Poses can take you deep inside yourself, challenging you to loosen the grip of indiscriminate emotions such as anger or fear.

The ultimate aim of aikido is to free the individual from anger and illusion, fear and anxiety. This is done by constantly having to become nonaggressive, according to Leonard. Aikido moves protect both the attacked, and if possible, the attacker. An aikidoist usually chooses not to harm an attacker even though the opportunity to harm is present. "Each time you're forced to be nonaggressive, you're brought nose to nose with your internal aggression," Leonard says. "This isn't done by denial but by integrating the emotion, understanding it, and transforming it into something else which, ultimately, is love." 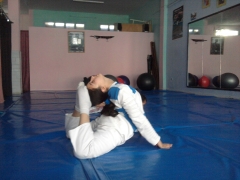